The Older Brother, often speculated to be named Naia (as suggested by what Younger Brother calls him, and the soundtrack), is one of the two protagonists in Brothers: A Tale of Two Sons. He and Younger Brother embark on a journey to retrieve the Water of Life to save their dying father.

Older Brother appears to be either in his late teens or early twenties, and has a strong, but slender build. He has brown hair, and a blue color scheme to his clothes, which consists of a shirt stitched along the middle and a vest, with blue pants and boots.

Older Brother appears to represent a responsible, mature brother archetype. Interacting with certain NPC's show that he likes to briefly help people with their work, but is also determined to get to the Tree of Life, as he constantly asks for directions. Interacting with certain NPC's suggests that animals don't like him and he has no musical talent. He also may be patient with his younger brother's antics, albeit sometimes not listening to him.

Older Brother is also shown to be easily enamored, as shown when he falls for the Lady they saved from the tribe of gnomes. This, unfortunately, leads to his demise, as the Lady deceives him and his brother into walking right into her lair. But it can be interpreted that he has a lot of faith in his brother to finish the task at hand, and it is speculated that he helps Younger Brother overcome the obstacles at home through his spirit.

- It's likely that his actual name is Naia, as there is a song in the official soundtrack named after him. Alternatively, Naia may be a term for "older brother."

-Fans often hold high regards to the game due to his death, and the emotional impact players feel in the following scenes. 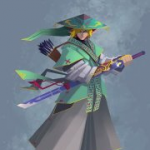